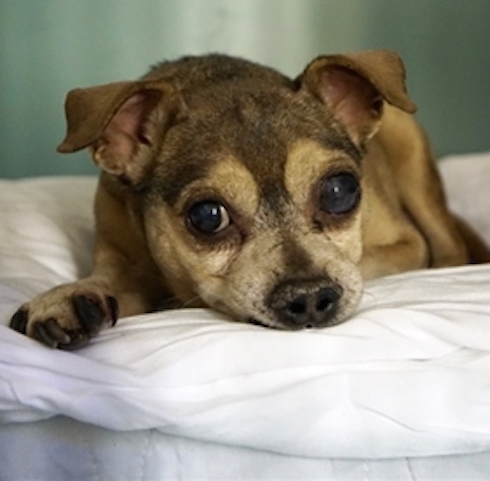 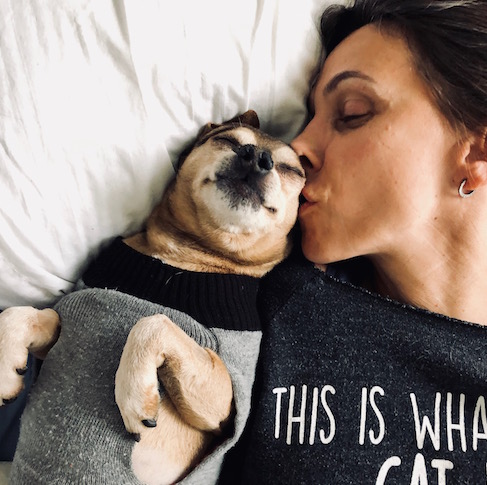 Johnny Cash has been adopted!

We are overjoyed to share that little Johnny Cash has been adopted by his loving and devoted foster family (his now FOREVER FAMILY)!!

11 year old Johnny had a rough start in life (he turned blue and stopped breathing overnight the first day we took him into our care) and has been fighting a number of medical issues. We pulled him from the NYC Animal Care and Control city shelter in hopes of getting to the bottom of his needs and, at the very least, giving him the love and care he deserved (he was given up by previous neglectful owners because he started having accidents in the house).

After a number of trips to the vet and a visit with the neurology department at the Animal Medical Center in NYC, we finally got some diagnoses for little Johnny. He had had a stroke at some point in his life, and due to increased cranial pressure, has COMS (Caudal Occipital Malformation Syndrome) which causes him to have seizures. He also has intervertebral disc disease, glaucoma, a chronic bronchointerstitual pattern and a collapsing trachea.

Despite all of this and all that he’s been through, Johnny is one of the happiest, sweetest little pups ever and, with every day that has passed, his former foster parents have fallen deeper and deeper in love with him. So much so, that they have decided to make him a permanent member of the family. While Johnny definitely hit the jackpot with two parents who just want to love and take care of him, Tami and Dave consider themselves the lucky ones.

We are forever grateful to Tami and Dave for adopting a senior pup with some special medical needs, and we are over the moon for little Johnny who, since day one has made it clear, only has eyes for his forever parents. 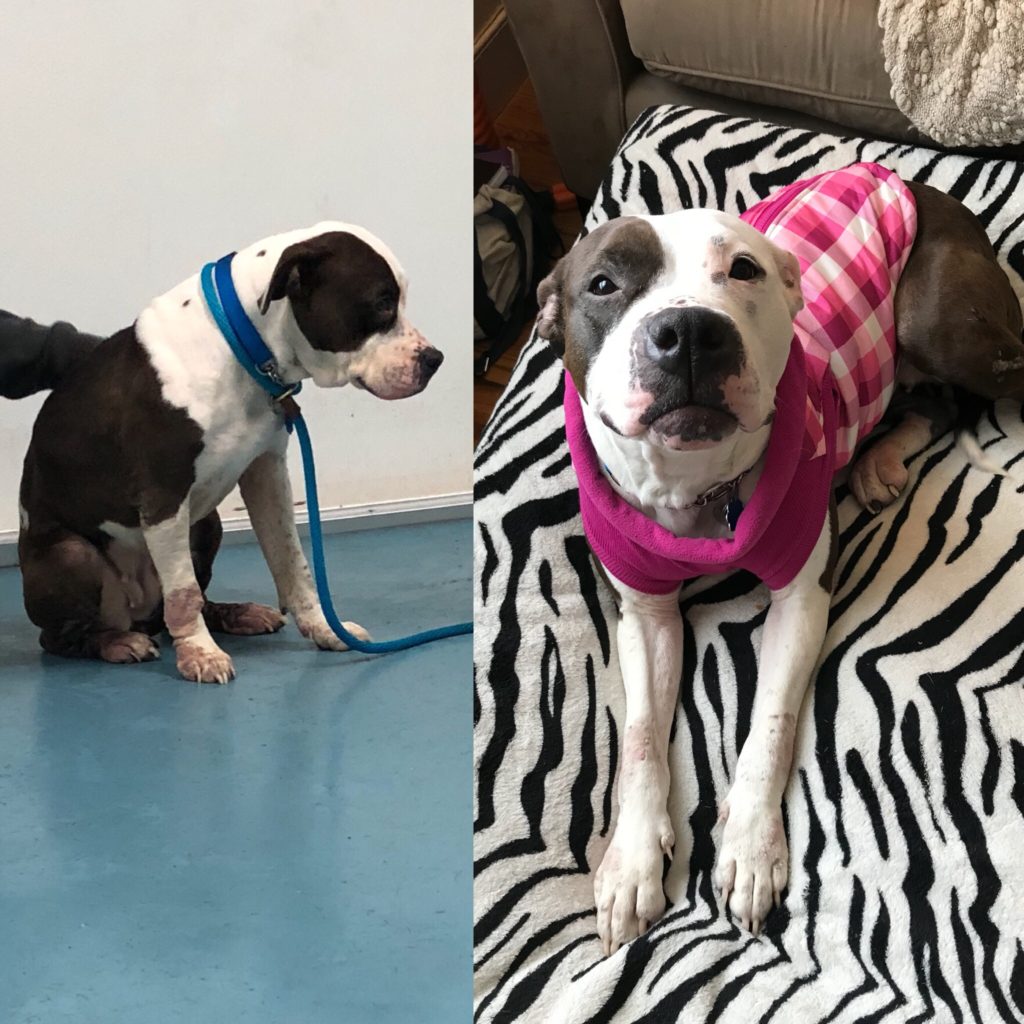 Juliet has been adopted!

On a visit to the Associated Humane Society of Newark, one dog in particular caught our eye. Extremely skinny Juliet was standing in the back of her kennel with raw and red skin, swollen paws covered in sores, shaking with her head down. We did not know exactly what was wrong or what she had been through, but we were certain that she not only needed medical attention right away, but that she needed out of the shelter as soon as possible. It was clear this poor dog had suffered horrible neglect for a long time, and that she physically and emotionally could not survive the stressful shelter environment.

Juliet was terrified of everyone and everything. She would not take a treat from a person's hand. Her tail was constantly tucked between her legs and she avoided being touched. Juliet broke our hearts, and we made it our mission to get her out of the shelter. She reminded us so much of other dogs we had rescued, and we believed that with a little bit of patience and some medical care, Juliet would eventually come out of her shell. Although she was so fearful, we could see just how sweet and loving this girl is deep down.

Luckily, we were able to find fosters Brianna and Barney who were looking to help a dog in real need. With antibiotics, some medicated baths, and most importantly love, Juliet started looking and feeling so much better after only a few days. She warmed up completely to her foster parents, who quickly decided they could not let her go.

Thank you to Brianna and Barney for not only adopting sweet Juliet, but for opening your hearts and home to a dog in such great need. Juliet is a genuine example of resiliency, forgiveness, and unconditional love that makes rescue animals truly special.

Honey has been adopted!

A couple months ago we pulled sweet Honey from the Associated Humane Society’s Newark branch with the help of Susie’s Senior Dogs, who writes:

"8 year old Honey had to endure a lot of change in her senior years. But now she can finally feel safety and love again. Honey got ADOPTED!! Honey was originally surrendered to the Newark shelter in New Jersey when her elderly owner her could no longer care for her. At the shelter, Honey was completely shut down and depressed. She lost the one person she knew! The staff and volunteers were worried about her well-being. Thankfully, Honey moved into foster care through Shelter Chic animal rescue. In foster care, she was able to finally get some rest and relaxation that living at the shelter prohibited and took a toll on Honey. While in foster care she was also able to attend several adoption events which really helped her personality shine! Honey has been with her forever mom for one month now and these two have found quite the rhythm together. They are a perfect pair!"

Ellen wrote, "Honey has been with me for a month now, and we couldn't be happier! I definitely hit the jackpot with her. She's such a sweet, laid back, loving lady. She was anxious in the beginning - the first night she wouldn't fall asleep until her bed was directly next to mine - and she still follows me any time I leave a room. She got to come to work with me a couple times before students arrived, and she charmed everyone - even my colleagues who were scared of dogs!Honey continues to be amazingly tolerant and patient with children and she is becoming more and more social with other dogs. We spend our weekends hanging out in the park, the farmer's market, or having brunch with friends. I'm so grateful we found each other and can't wait for our future adventures!" 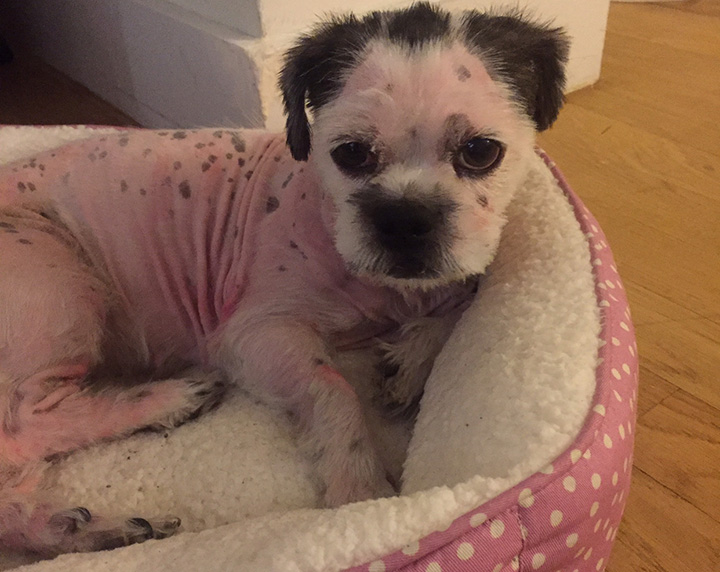 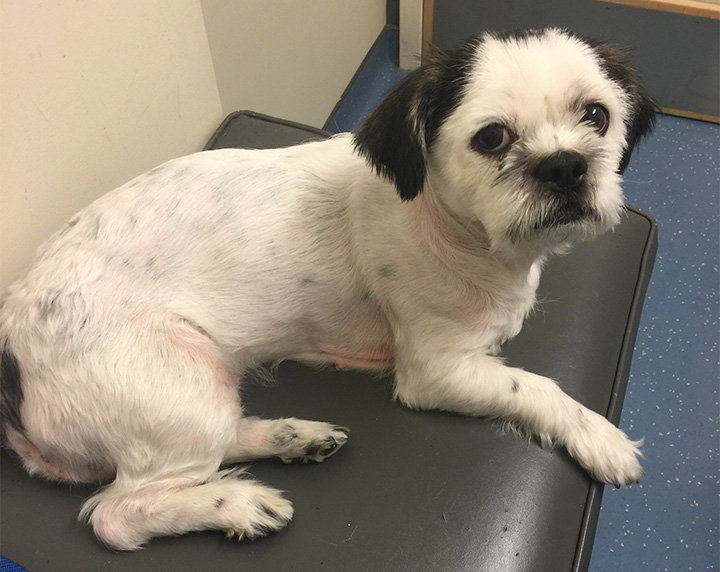 June Bug has been adopted!

June Bug (formerly known as Bella, and now known as Nico) has been ADOPTED!

We pulled this sweetheart from Associated Humane Society of Newark in early August where she had been surrendered (and clearly neglected) by her previous owners.

There were a number of people who inquired about adopting our Shih Tzu, but when they saw the pictures of her skin condition they backed out.

Nico had been living in her "foster to adopt" home, with people who have loved her and have been dedicated to taking care of her through her healing. With a special diet, medicated baths, and a little TLC, Bella is back to looking and feeling like the happy little pup she is.

Congratulations to Nico and her forever family!