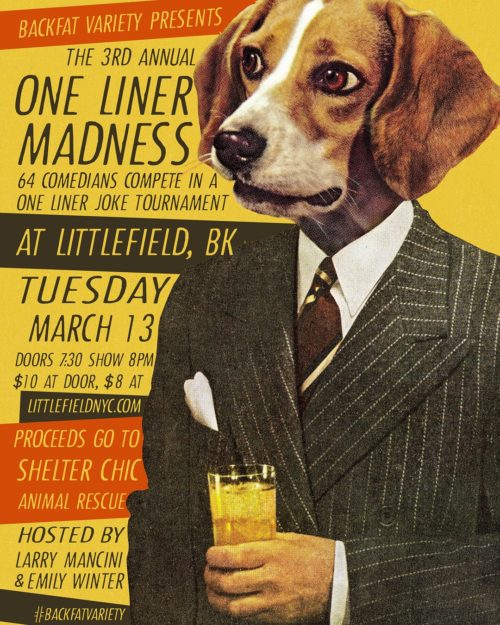 This fast-paced, raucous contest goes from 64 comedians to a champion in just 90 minutes. It’s a single-elimination, comedy version of March Madness, and participants advance based on audience applause. The show has raised more than $2,400 for charity, and this year all proceeds benefit SHELTER CHIC Animal Rescue (shelterchic.org), an organization that’s saved the lives of thousands of animals in NYC.

Buy a ticket NOW to save a pup… and secure a seat before the show sells out.

BackFat’s ONE LINER MADNESS is hosted by Larry Mancini (of the band The Tracys) and Emily Winter (Glamour, NBC Late Night Writers’ Workshop Script Judge). Comedy referees are previous winners Missy Baker and Camille Theobald. Special guests from Shelter Chic Animal Rescue will be on hand. Finally, the show stars YOU, the audience, who will determine 2018’s Funniest Comedian in Brooklyn.